So I wanted to share with you all my own experience of being both a club member and captain of the Ladies’ team at Langley.

It was my brother (a tennis coach) who recommended Langley to me as I was looking to get my then 2 year old into tennis and he used to play tennis with one of the coaches there.
Heavily pregnant at the time with my second boy I would watch Jude play toddler tennis on a Wednesday afternoon, while chatting to the other mum’s. Two of the mum’s played regularly and got me thinking about playing myself. Encouraged by Sue and Sarah, two months after my Gabriel was born, I signed up for a free introductory lesson.

Back then the club was run by Tim Walters. Tim is an incredibly talented coach. He was full of charisma, extremely dedicated and was really instrumental in making the club the success it is today. I fell in love with tennis instantly. From that point on, unless on holiday or unwell, I have pretty much played at least twice a week for over 6 years.

Now I’d played tennis as a child, but I’d never had a tennis lesson and certainly didn’t have the raw talent of younger brother. It had been more a case of heading down to the local park with friends. So, in short, I was pretty much a beginner and quickly realised how little I knew about tennis. I was, however, hugely dedicated and I would literally count down the days until I would next be playing in drills or having a lesson with Matt (my first coach, who is not only a great coach but also a great drinking buddy on a night out and is really missed following his move to Oz).

About a year after joining, the club wanted to set up a mixed doubles team and I was asked to captain it. This was a totally new experience for me. I’d never played in a team for any sport, even at school (I’m not going to count playing in the netball team at primary school). It was therefore a pretty steep learning curve, but one I enjoyed, despite the stress of finding a team each week and constantly checking the weather! I was truly rubbish back then but I was lucky enough to have a fantastic partner in Julius (if you watch Holby City, he plays Jason). Jules was incredibly patient with me, is a brilliant player and was great fun to be around. One of my best memories is still our first win of the season. It was against Moor Park, it was a gorgeous evening and it was my first ever time playing on grass courts. What better way to spend a Tuesday night!

The following season I joined the Ladies team. We had a fabulous captain in Fabiola and got promoted two seasons in a row. The feeling of contributing to a team win is incredible and we shared some great memories as a team. Fabs was married to Tim and it was sad day for me when they both left for Australia.

Stepping into Tim’s shoes would not be an easy feat for anyone but Andre (our Director of Tennis) has done this with ease and it’s been a pleasure seeing him and his family continue to take the club forward. You literally could not meet a nicer family and they are so dedicated to their club, as are Roz, Sue and all the coaches, who each play a massive part in making Langley the great club it is. I spend hours each week at the club and it’s become like a second home over the years. I play every Wednesday night in Ladies’ drills (sometimes Thursday and Friday night too), my sons (aged 6 and 9) play Saturday morning and I also have also private lesson most weekends. During April and August we play matches on a Tuesday night and I also regularly play in the round robin tournaments organised by the club. And when I’m not playing tennis I’m often talking about tennis or watching it.

My coach Dimitris is incredible. He’s been my coach for nearly two years. His knowledge of tennis is amazing and he has pushed me in all areas of my game and I am now playing at a level I am really proud of when I think of where I started. He is also one of the nicest people I have ever met.

My boys are coached by Lewis and they both idolise him. He makes them laugh, encourages them and I put their long awaited love of tennis (to my utter joy!) 100% down to Lewis.

I also now have the pleasure of being captain of the Ladies team following Fabiola’s move to Oz. Andre doesn’t know this but he actually called me on my birthday to ask if I wanted to be captain. That call really meant so much to me and I may have shed a tear or two! Becoming captain has come with some challenges, not least losing Fabiola as a player. She was easily one of the best players in the league and you could pretty much guarantee she’d win her three sets, whoever she was playing with (even me!), meaning just a couple sets were needed from the other two pairs to get a win. We also lost some really strong players through injury/moving out the area too etc. and so I found myself having to pretty much build a team from scratch, most of who would be playing their first ever competitive match. You can’t underestimate how nerve-wracking this can be, especially when you playing really established teams who have been playing doubles for years, as well as facing the odd unpleasant opponent, although fortunately this is very much the exception! So it’s been a tough couple of seasons for the team and we have been just relegated for the second season in a row!

So this might all sound quite negative but it’s actually been the opposite. I could not ask more from my team. Despite not winning a single match this season we have laughed together, supported each other through some heartbreaking tie break losses/lost match points, praised each other and never once given up. Most importantly, we have enjoyed every minute. And this is because we all love tennis beyond words. We are improving all the time and I have no doubt that our time will come and we will see all our commitment and hard work pay off. When this moment comes it’s going to be so well deserved and so special.

Another highlight for me this year has been spending Sunday afternoons watching the coaches play their league matches. This really is tennis on another level and it’s been so exciting to watch and cheer them on with their family and friends.

It’s really hard to put into words how much my club means to me. Tennis has become such a huge part of my life thanks to Langley. Bottom line is that It just makes me so happy. The stresses of work and life disappear the second you step on to court. The facilities are amazing. The atmosphere is always welcoming. There is also so much to learn in tennis and it’s such a rewarding experience to feel your technique and game improve, that moment when something just clicks after months of trying or you just hit the perfect shot. I have met so many lovely people, made some really close friends over my six years at the club. That feeling of pure enjoyment when I play tennis is also just as strong now as it was six years ago when I decided to take that first lesson and realised I’d found something I never wanted to stop doing. 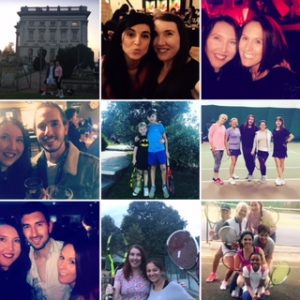