During the early hours of Saturday morning seven of us were lucky enough to represent Langley Tennis club by taking part in a 24 hour charity tennis event at the National Tennis Centre in Roehampton. The event is in its sixth year now and raises around 50-60K each year.

The format of the event is simple. Each year two professional tennis players will play tennis non-stop for a gruelling 24 hours. 12 clubs are then invited to play against them.

This year Marcus Willis and Lucie Ahl stepped up to the challenge. As many of you will know, Marcus is probably best known for his amazing performance at Wimbledon 2016, where he lost but put up a great fight against Federer in the second round. Lucie also enjoyed a successful professional career and for a period was the highest ranked female player in the UK.

Marcus and Lucie were then also supported by a number of ex pros including Danny Sapsford, who some of you will remember put on a brilliant coaching session/exhibition for our club last November.

Langley were scheduled to play between 4am and 8am. This was then split into four one-hour slots with the final pair taking part in a serving competition, which would raise further money for your club based on how many times you could hit a target out of ten serves, with the speed of serve also recorded. 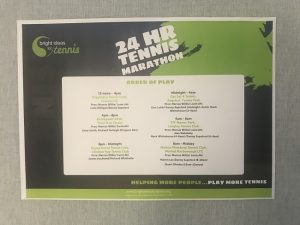 First up and biggest credit definitely goes to Alison, Charlie and Simon Walter, who all left Kings Langley at around 2.30am and were on court warming up an hour later. They all played with/against Lucie Ahl and Alex Slabinsky. Alex was ranked as British Men’s No. 4 between 2008-2009.

The rest of us travelled up the night before and got rooms at the tennis centre. This was great as we were literally sleeping a couple of metres behind the courts. My room took me back to living in student halls, but with the luxury of at least having an en-suite! For some extra inspiration each room had a picture of various tennis stadiums from around the world. The rooms are usually used by players competing at the many competitions held at the National Tennis Centre, which include the Wimbledon qualifiers. 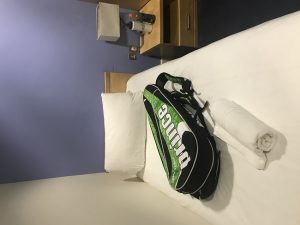 I was too excited to get much sleep but managed around 4 hours of broken sleep and got over to the courts to catch the end of Alison and Simon’s match. Simon and Lucie Ahl took the set 7-6 after a nail biting tiebreak! 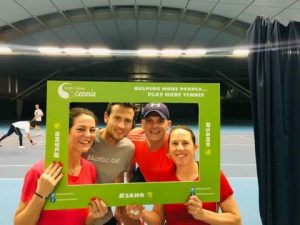 Charlie Walter was next up to play with Simon. Both played some great points and I’m sure playing with your son/dad against two pros will be a great memory for both. They also got two games off the pros, which was pretty amazing. I should also mention that Simon managed to ace both Lucie and Alex. In hindsight, we really should have saved Simon for the serving competition! 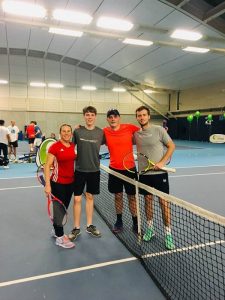 I then practised with with Sue Banks and Anna Frank as they prepared for their 6am slot. At this point they switched up the pros for the last 2 hours, meaning we were going to get to play with/against Marcus Willis and Danny Sapsford. I’d been secretly hoping to play on the same court as Marcus so this was great news for me!

Anna and Sue both played brilliantly. Anna and Sue played in pretty much every match for the Ladies team last season and are both really committed players. The improvements in their game over the last year have been amazing and I’m so excited to have them in the Ladies’ team as the new season draws closer. It was great to watch them play so well. 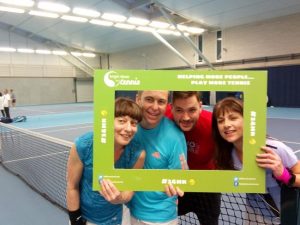 Finally I was paired up with Alex Beal. Alex has been at the club for as long as I have and is so committed to Langley that, despite having moved to south London, she still travels to to play at Langley and even played matches whenever she could last season. We play at different times so don’t often get to see each other at Langley so it was especially lovely to catch up and share such a great experience together. I was paired up with Danny and we played a full set against Alex and Marcus. Danny and I took the set 6-3. We then switched partners for another three tight games before the serving competition.

It’s really hard to put into words how enjoyable playing with Danny and Marcus was. My first hope was that I would be able to not waste the opportunity and actually play well. Playing alongside anyone stronger than you generally ups your game and fortunately this was the case for me and Alex. We put everything we had into each point. Neither of us played safe. This approach obviously meant a few errors but also some amazing winning points from us both. These were all met with complements and praise.

Given Marcus had been playing for 19 hours straight and Danny had played around 14 hours without sleep their enthusiasm, support and encouragement was just amazing. They could not have made the experience more fun or rewarding. My only wish would have been to have been able to play longer!

As we shook hands at the net Danny commented that Alex and I were very similar players. He said we both had loads of power, played a high risk game but both played some great shots/rallies and played really well. Marcus agreed and said how much he enjoyed playing with us. I literally could not have felt any happier in that moment (as you can probably see in the photo below!). 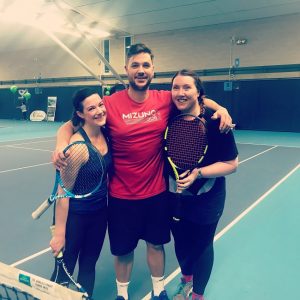 The opportunity alone to play with Marcus and Danny would have been brilliant, but the confidence boost their feedback gave, how friendly and welcoming they were, how fun they made it all and getting to share the experience with friends that love tennis as much as I do just made the experience so special.

Alex and I then had to serve 10 times and try to hit over a target as many times as we could. We only managed to do this four times between us both. To be fair, it was harder than it looked and bit pressured with so many people watching! On a positive though, I managed to hit a 85 mph serve, which was the fastest out of the women competing. Alex also had the second fastest serve at 77 mph. Danny also said it would be more accurate to add another 10%. So we can be pretty pleased with our speed if not our accuracy!

Special mention to Danny for organising this great event. It’s a great charity and great event. Essentially its aim is to help more people play tennis and help clubs fulfil the potential of their players. What’s great is that this event is all about giving the clubs taking part the opportunity to raise funds that will directly fund their own club’s chosen projects. This can include improving facilities, buying new equipment and improving the tennis programmes on offer.

For Langley, our aim was to raise enough funds to, among other things, buy a defibrillator for the club and be able to offer more programmes aimed at helping those with disabilities play tennis.

Last but not least, I have to mention Lucie Ahl and Marcus Willis again. Both played the whole event while injured. This meant physios between some of the games and even a quick ice bath for Lucie. Both showed great dedication, great humour and smiles throughout the event and it was a complete honour for us all to share a court with them both.

It’s been a tricky sell to get sponsorship from those outside the club, so I’m reaching out to those who play/parents of players at Langley to ask if you would consider making a donation, however small, to any of the players who took part in the event. I’ve included the links to all our pages below.

Thank you for reading!